Note: Calamari is just beginning to implement Governance features, so a lot of the planned features aren't available yet. This document describes what is currently available, and will be updated as features are released.

Welcome to our Governance docs! Here you'll find a high level overview of how token holders make decisions about how the Calamari system is updated. As a decentralized system, it's crucial that the Manta Network core development can't implement or remove any features without community consent. The roadmap of planned feature development lives here.

The Calamari Governance Deep Dive doc is a great resource if you're looking for more of the technical details about show Calamari governance works.

At a high level, changes to Calamari follow three steps:

There are three key actors in this system:

Right now, only the council can submit new proposals. The method they use is called democracy.externalProposeDefault, and it will be available to all token holders in upcoming releases.

All token holders get to vote aye or nay on referendums. The percent of ayes required for a referendum to pass changes based on turnout. The method democracy.externalProposeDefault has a "negative turnout bias", meaning if there's low turnout, the threshold to pass is lower, and as turnout increases, the threshold increases. For example, if the turnout is 25%, then 34% ayes are needed to pass. But if the turnout is 100%, then 51% of ayes are needed (a simple majority).

This approach to voting is called Adaptive Quorum Biasing. The idea behind it is to anticipate that voter turnout in practice is never going to be 100%, and that different proposals will have varying levels of contentiousness and trustworthiness. For example, we assume that a proposal submitted by the Council is more trust worthy than a proposal from any public token holder, so we want to apply a negative turnout bias to the vote.

Once a referendum passes, it is automatically implemented by the chain according to the referendum code. There's a delay before the implementation starts so that stake holders can prepare for the change.

A note on the responsibilities of the Council and Technical Committee​

The Technical Committee can fast-track the launch period, voting period, and enactment period in the case of an emergency. How much the periods are shortened depends on how many committee members believe the action is necessary, with unanimous agreement required for instantaneous changes. Similarly, the Council can cancel a referendum during the voting period.

Clearly the Council and the Technical Committee have a lot of influence over what proposals and referendums get passed! The Council offsets the usual low voter turnout in democratic systems, and is expected to submit proposals for regular operations and maintenance of the system. The Technical Committee exists to handle emergency situations where fast technical updates are needed.

How To: Vote on a Referendum​

The actions you can take as a public token holder can all be executed by connecting to a Calamari node using the Polkadot.JS apps interface. You can find our tutorial on how to vote in a referendum below: 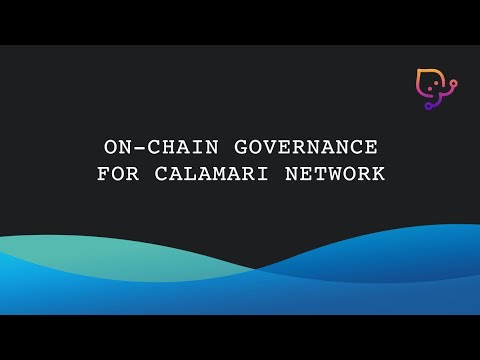 Note that voting with the default amount from polkadot-js front end will fail, due to the fact that the transaction fee is more than the existential deposit of accounts. Please reduce that amount slightly to avoid this error.

If you'd like to learn more about governance in the Polkadot ecosystem, these links are a great place to start: